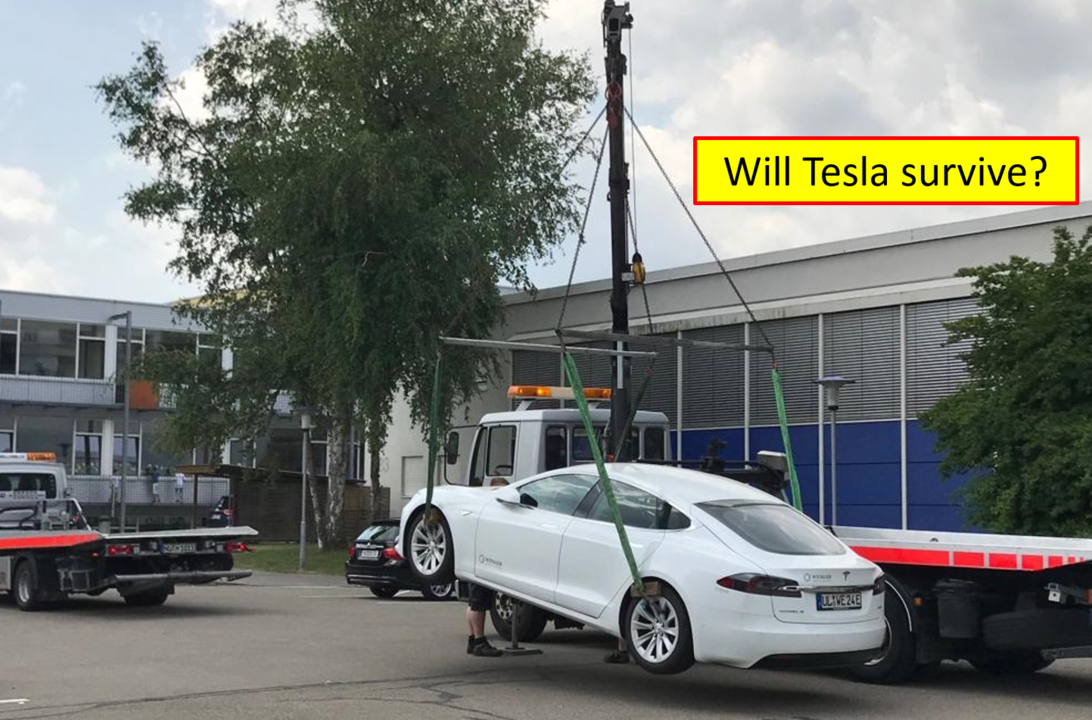 Will Tesla survive? I do not mean my car, I mean the company as a whole.

Here’s why I raise this question: Obviously, Elon Musk hasn’t achieved profitability yet. The cars sell pretty well, but according to the news, it is getting more and more difficult with other players entering the field, and the necessary investments are still very high.

I have the impression that in every difficult situation when Tesla seems to run out of money, Elon has a new idea he tries to sell. The best truck in the world, a sports car, a business model that beats Uber based on autonomous driving, etc.

However, I think that at the end of the day, the details count as much as the big story.

On the picture, you see my Tesla being lifted on a tow truck. It’s the second breakdown in the last six months and the fourth problem since I have the car. This time it happened when my wife came back from an event with the kids. The car just didn’t start anymore, and she had to call her father to pick them up. Three weeks before, I already had an alert saying “Battery cooling and air conditioning limited”. A service appointment was scheduled for mid-July (like five weeks after the problem appeared, my conclusion was: “Nothing serious”).

All in all, Tesla has handled the situation in a professional way: I was asked the right questions on the phone, the car was towed, repaired and I was provided a BMW in the meantime. However, it cost my wife like six hours to deal with Tesla, the tow truck and the rental car company, and it cost me almost four hours to drive to the closest Tesla garage to bring back the BMW and get back my own car. So we wasted another ten hours of our life due to the missing reliability of the car. And on my way back, the next warning showed up on my dashboard: “Tire pressure low” (I have had that like 10 times now, and even a new tire did not help so far…).

Anyway: Things happen, I am an early adopter, and that means I sometimes have to accept certain disadvantages. However, with four repairs in less than three years with 45,000 km and a roundtrip to the Tesla dealer of like four hours, I am far from being happy. That’s an MTBF of less than 15,000 km. Not acceptable.

Maybe it’s just bad luck with my specific car. If it is a systematic problem, I don’t think Tesla as a company will survive.

Please let me know what you think and what your experience is.

(I will let you know what the problem was as soon as I get informed.)